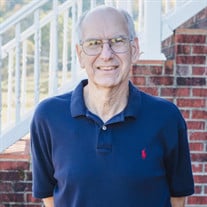 Mr. Robert Charles “Bobby” Tower, age 67 of Lancaster, TN, passed away on Tuesday, November 23, 2021. Mr. Bobby was born October 12, 1954 in Oceanside, CA, a son of Jean Erdine Dryer Tower and the late Robert Edward Tower. He was also preceded in death by Sister; Cindy Nash. Bobby was a 1972 graduate of Gordonsville High School. He married Nancy Ray on October 21, 1972. Bobby Tower was a family man. He was a devoted husband, father, and servant of Christ. He was a member of the First Baptist Church in Alexandria, TN and had been an ordained deacon at the Lancaster Baptist Church. His life was serving God, serving others, and serving his family. When they planned to take the family to Gatlinburg on vacation, Bobby surprised everyone with buying a van so the family could all be together. He worked for the Army Corp of Engineer for 35 years as power plant operator at the Cordell Hull Dam. Charles, his only son, was his pride and joy. He taught him many lifelong skills, but the most important was his love, devotion, and service to others. He was a very generous man. He adored his two granddaughters; Emma and Elaina. He never missed a school function or family event, even at his sickest. He traveled early in the morning or late at night, whichever was necessary to be there. He was a hard worker and the best card player and always made sure the family had fun when together. He could fix or build anything. As Bobby was fighting cancer, he never complained even through sick times. To know him was an honor – to be loved by him was an immense blessing. Bobby is survived by his Wife of 49 years; Nancy Ray Tower. Son; Charles (Brandice) Tower of Hopkinsville, KY. Grandchildren; Emma Tower and Elaina Tower. Mother; Jean Tower of Double Springs, TN. Brothers; Scott Tower, Timmy (Linda) Tower, Billy Tower, David (Phyllis) Tower, and Shawn (Vicki) Tower. Funeral Services for Mr. Tower are scheduled to be conducted from the Gordonsville Chapel of Bass Funeral Homes on Saturday, November 27, 2021 at 2PM with Bro. Billy Friel officiating. Interment will follow in the Gordonsville Cemetery. Visitation with the family will be at the Gordonsville Chapel of Bass Funeral Homes on Saturday from 10AM until service time at 2PM. The family requests memorials in Mr. Bobby’s memory be made to the American Cancer Society or to St. Jude.

The family of Bobby Tower created this Life Tributes page to make it easy to share your memories.

Send flowers to the Tower family.