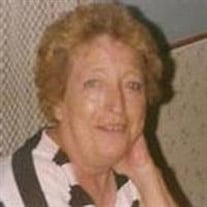 Ms. Cassie Wynema Stewart Age 76 of the Bowlings Branch Community passed away Monday, April 15, 2013, at Sumner Regional Medical Center.Ms. Stewart was born on July 16, 1936, the daughter of the late Retta B. Thompson and Norman B. Whited. She... View Obituary & Service Information

The family of Cassie Wynema Stewart created this Life Tributes page to make it easy to share your memories.

Send flowers to the Stewart family.