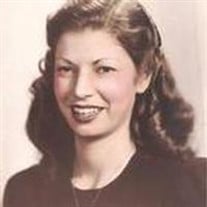 Mrs. Charlene Watkins Williams, Age 85 of Agee Branch Lane, Gordonsville, TN., died Friday, May 20, 2011 at her residence. Mrs. Williams was born April 21, 1926 in Harlan, Kentucky the daughter of the late Mabel Shelby and Arthur Watkins. A sister, Billie June Watkins preceded her in death. She was married to Edward Arnold “Red” Williams on August 28, 1948 in Middlesboro, KY and he preceded her in death on October 12, 1991. She retired in 1960. She was saved in the year of our Lord, 1975 and was of the Baptist Church affiliation. Mrs. Williams is survived by her daughter, Linda K. (Mitchell) Williams-Abernathy of Gordonsville, TN. Two Sisters: Maxine Green of Dayton, Ohio and Arthur Jean Meister of Dayton, Ohio. Two Brothers: Vernon “Mickey” Watkins of La Follette, TN and Doyle Watkins of Jacksboro, TN. Several Nieces and Nephews. Family and Friends will assemble at the Bakers Forge Cemetery, La Follette, TN on Monday, May 23, 2011 at 3:00 P.M. (EDST) for graveside services and interment.The Williams family will receive friends at the Gordonsville Chapel of Bass Funeral Homes on Sunday, May 22, 2011 from 5:00 P.M. to 7:00 P.M.

The family of Charlene Williams created this Life Tributes page to make it easy to share your memories.