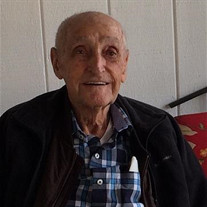 Mr. Clarence Edward Nixon, Age 89 of Hickman, TN, passed away Thursday, December 14, 2017. Born February 12, 1928, the youngest son of the late Finis and Eva Nixon of Hickman Tennessee. He was also preceded in death by his Brother; Robert Jim Nixon, Sister; Ocia Nixon Paschall, and Granddaughter; Etta Turner. In his late teens with his brother in law, Ray Paschall, Clarence created a partnership to purchase what was known as Nixon & Paschall General Merchandise Store in the heart of Hickman. Close as brothers, Ray Paschall ran the store while Clarence chose to volunteer in the US Army in WWII and trained and worked as a medic assistant. As with all war veterans, he experienced many things no individual should have to. Upon release from the military on June 30, 1950 Clarence married the love of his life, Mary Etta Turner and spent the next 67 years working, raising a family, and building community all around them. He took over his role in the business and ran a peddling truck bringing food and goods to every holler around while Ray and Mary Etta held down the store. Clarence was beloved on his route and knew all his customers by name and merchandise preference. In the store, Clarence, Mary Etta, and Ray were known for helping families get over the hard times by giving credit and waiting until crops were sold to pay their food bills. As a second job Clarence became a substitute rural mail carrier and later after closure of the store in 1987, he worked full time for the United States Postal Service. He was esteemed on his route where he would stop, joke and even rescue his patrons from snakes. He retired from the US Postal Service in 1995. He also was known to fix many pumps in the freezing cold and dead of night. In his retirement he took care of his neighbors. Clarence and Mary Etta have 5 children who could have asked for no better parents; Mary Susan Johnson, Victor Keith Nixon, Candice Kay Medley, John Timothy Nixon, and Pennye Lyn Nixon. They are also the proud grandparents of Ellen Roeber, Katie Nixon, Douglas Albritton, Sayer Nixon, Jessica Frye, Lauren Davis, Zachary Medley, Nicholas Nixon, Taylor Johnson, Catherine Nixon, Atticus Turner, Will Turner, Yamini West, and Miles Nixon. They too are blessed to have 11.5 great grandchildren. Clarence loved many people in his life but of special importance was his son in law, Mark Medley, and others who he thought of as his children; Lisa Tuggle and Michael Joe Halliburton. Clarence was a member & deacon of Hickman Baptist Church where he served the Lord and worshiped joyfully with his family and neighbors. Clarence would say he was the luckiest man in the world to have had a life with such a wonderful wife, family, neighbors and friends. Funeral Services for Mr. Clarence Nixon are scheduled to be conducted from the Hickman Baptist Church on Monday, December 18, 2017, at 11AM with family delivering the Eulogy and Mark Medley officiating. Interment will follow in the Baird Memorial Cemetery in Hickman, TN. Visitation with the Nixon Family will be held at the Gordonsville Chapel of Bass Funeral Homes on Sunday from 1PM until 6PM and at the Hickman Baptist Church on Monday after 9AM until service time at 11AM. In lieu of flowers, the Nixon family requests memorials in Mr. Clarence’s memory be made to the Hickman Baptist Church or to Etta Projects at ettaprojects.org. “What you leave behind is not what is engraved in stone monuments, but what is woven into the lives of others.” ~ Pericles Bass Funeral Home, Gordonsville Chapel, Directors

The family of Clarence Edward Nixon created this Life Tributes page to make it easy to share your memories.

Send flowers to the Nixon family.