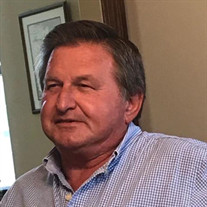 Mr. David E. Randolph, age 62 of Club Springs, TN, passed away on Monday, February 1, 2021. Mr. Randolph was born January 8, 1959 in Carthage, TN, a son of the late Samuel Fred Randolph and Hazel Jene Whitefield. He was also preceded in death by infant sister; Mary Ann Randolph and Brother-in-Law; Richard Smith. David was a 1977 graduate of Gordonsville High School. He worked for 5-Bravo Construction and was superintendent for the last 18 years. David was a member of the Macedonia The Baptist Church of Christ at Club Springs and also served as clerk and treasurer. Mr. Randolph is survived by nine siblings; Jene Smith of Llano, TX, Dene (Bill) Shipp of Brentwood, TN, Frank (Denise) Randolph of Elmwood, TN, Clifford (Glenda) Randolph of Dowelltown, TN, Samuel (Jackie) Randolph of Murfreesboro, TN, Rita Randolph of Hickman, TN, Dianna (Jeff) Winfree of Hiwassee community in Smith County, TN, Lee (Michelle) Randolph of Gordonsville, TN, and Tony Randolph of Hickman, TN. Twenty-three nieces and nephews and twenty-six great nieces and great nephews. Funeral Services for Mr. Randolph are scheduled to be conducted from the Gordonsville Chapel of Bass Funeral Homes on Friday, February 5, 2021 at 1PM with Bro. Tim Bennett and Bro. Gary McBride officiating. Interment will follow in the Gordonsville Cemetery. Visitation with the Randolph family will be at the Gordonsville Chapel of Bass Funeral Homes on Thursday from 3PM until 8PM and on Friday after 11AM until service time at 1PM. The family requests memorials be made to the Macedonia The Baptist Church of Christ at Club Springs.

The family of David Randolph created this Life Tributes page to make it easy to share your memories.

Send flowers to the Randolph family.