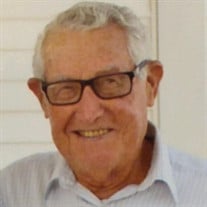 Mr. Eddie Lawrence, age 88, of Alexandria, TN, passed away on Sunday, December 20, 2020. Mr. Lawrence was born June 22, 1932 in Sykes, TN, a son of the late Millard S. Lawrence and Lula Kyle Lawrence. He married Loni Faye Parkerson Lawrence on December 23, 1960 and she preceded him in death in January of 2004 after 44 years of marriage union that produced four children. He was also preceded in death by second wife, Mary E. Lawrence. Eddie was a 1950 graduate of Gordonsville High School. He worked for 32 years at DTC until his retirement. He was a member of the New Hope Baptist Church where he served as a deacon. Mr. Lawrence was an avid farmer. Mr. Lawrence is survived by four children; Pam (Joe) Lipari of Flower Mound, TX, Donna (David) Phillips of Alexandria, TN, Jerry Lawrence of Alexandria, TN, and Charlie (Tracy) Lawrence of Alexandria, TN. Grandchildren; Kristen Lawrence, Emily Lipari, J.P. Lipari, Caitlyn Lawrence, and Rebecca Lawrence. Wife; Lucy Lawrence. Funeral Services for Mr. Lawrence are scheduled to be conducted on Wednesday, December 23, 2020 at 1PM at Avant Funeral Home. Interment will follow in the New Hope Cemetery. Visitation with the family will be at Avant Funeral Home on Tuesday from 2PM until 7PM and on Wednesday after 11AM until service time at 1PM. In lieu of flowers, the family requests memorials be made to the New Hope Cemetery, Northside Fund.

The family of Eddie Lawrence created this Life Tributes page to make it easy to share your memories.

Send flowers to the Lawrence family.