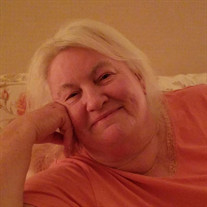 Mrs. Elizabeth Kunce Judd, age 69, of Lancaster, TN, wife of Sam Judd, went to meet her Savior on December 4, 2020 following a sudden illness. She was born in Little Rock, AR, on August 15, 1951 to Margie Woodard Kunce and the late Roy James Kunce of Shreveport, LA. She was also preceded in death by Sister, Candace Kunce Maynard. Mrs. Judd graduated from Woodlawn High School in Shreveport, LA, in 1969 and LSU at Shreveport School of Nursing in 1972. Liz’s lifelong career was a neonatal intensive care nurse having lived in Louisiana, Texas, Colorado, Alaska, Alabama, and Tennessee. She also worked as a nurse for several years at the U.S. Space and Rocket Center Space Camp in Huntsville, AL. She is lovingly remembered as a cutthroat scrabble player, family genealogist, gardener, miniature horse breeder, chicken watcher, and devoted church member. She was one of the sweetest most beautiful kind hearted souls anyone could ever know. She loved her grandsons so much they were her whole world! She did everything she could to always make it to all their games. We know the boys will miss looking up and seeing her in the stands, but now she will have the best seat in the house for every game. She is survived by her husband of 49 years; Sam Judd: Son, Chris (Katie) Judd of Mt. Juliet, TN, and daughter, Kim Judd of Lancaster, TN. The light of her life were her four grandsons, Bobby Parliment, Joey Parliment, Ryan Judd, and Cooper Judd. Left to cherish her memory are her mother, Margie Woodard Kunce, Sister, Esther (Lee) Kunce Hartzheim, Brother, Karl (Jennifer) Steven Kunce, and Sister, Lou (Byron) Kunce Hilley. She also lives on in the memory of a multitude of dear nieces, nephews, and cousins. Funeral Services for Mrs. Elizabeth Judd are scheduled to be conducted from the Gordonsville Chapel of Bass Funeral Homes on Wednesday, December 9, 2020 at 1PM with Bro. Ray Gilder officiating. Interment will follow in the Gordonsville Cemetery. Visitation with the family will be at the Gordonsville Chapel of Bass Funeral Homes on Wednesday from 12PM until service time at 1PM. In lieu of flowers, the family requests memorials be made to the First Baptist Church, Gordonsville Building Fund.

The family of Elizabeth "Liz" Kunce Judd created this Life Tributes page to make it easy to share your memories.

Send flowers to the Judd family.