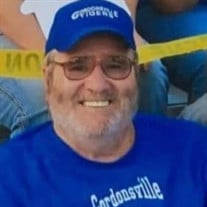 Mr. Emmett Malone, age 83 of Hickman, TN, passed away on Tuesday, July 28, 2020. Mr. Malone was born November 26, 1936 in Gordonsville, TN, a son of the late Cecil Martin Malone and Violet Preston Malone. He was also preceded in death by Daughter; Kelli Pitman and Sister; Jean Evelyn Grisham. He was a 1954 graduate of Gordonsville High School. After high school, Emmett served in the U.S. Marines for four years. Mr. Malone worked for Bonnell Aluminum for over 30 years. He also enjoyed farming and was a big Gordonsville Tigers fan. He was the sweetest, kindest, most loving man, who always had a smile on his face. He will forever be remembered as a great husband, father and friend and will be greatly missed. Mr. Malone is survived by Wife; Betty Malone of Hickman, TN. Five children; Mike Malone of Hickman, TN, Bob Malone of Hickman, TN, Beth Kemp of Defeated, TN, Kellie King of Murfreesboro, TN, and Staci Kochmann of California. Ten grandchildren and nine great-grandchildren. Sister; Erma Malone Poston of Carthage, TN. Brother-in-Law; Dr. Joe W. Grisham of North Carolina. Memorial Services for Mr. Malone are scheduled to be conducted from the Gordonsville Chapel of Bass Funeral Homes on Saturday, August 8, 2020 at 5PM. Visitation with the family will be at the Gordonsville Chapel of Bass Funeral Homes on Saturday from 3PM until 5PM. The Family requests memorials be made to the Gordonsville High School Sports Complex.

The family of Emmett Malone created this Life Tributes page to make it easy to share your memories.

Send flowers to the Malone family.