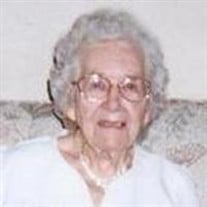 Mrs. Evelyn Gertrude Winfree, age 94 of Alexandria, TN passed away Tuesday, August 14, 2012 at her residence.Mrs. Winfree was born April 26, 1918 in Alexandria, TN the daughter of the late Elie Nathaniel Grandstaff and Rosie Mae Davenport. She married Fred Adamson Winfree on January 24, 1948 and he preceded her in death on May 28, 1995. She was also preceded in death by Son; Randy Winfree, Two Daughters; Wanda Lassiter and Jeanette Winfree; Three Siblings; Howard Grandstaff, Frank Grandstaff, and Elizabeth Winfree. She worked for Alexandria Garment for 23 years and was a member of the Linwood Pentecostal Church.Mrs. Winfree is survived by her Four Children; Annette (Stan) Mitchell of Saluda, SC., Debra Grisham of Grant, TN., Rickey (Sandy) Winfree of Alexandria, TN., and Benita Barrett of Brush Creek, TN. 10 Grandchildren, 19 Great-Grandchildren, and 2 Great-Great Grandchildren also survive along with 2 Sisters; Minnie Grisham and Dorothy Enoch of Carthage, TN.Funeral Services for Mrs. Winfree are scheduled to be conducted Thursday, August 16, 2012 at 3PM at Avant Funeral Home. Bro. Roger Grisham will officiate and Interment will follow in the Brush Creek Cemetery.Visitation with the Winfree family will be held on Wednesday from 11AM to 8PM and on Thursday after 11AM until service time at 3PM. AVANT FUNERAL HOME, DIRECTORS.

The family of Evelyn Gertrude Winfree created this Life Tributes page to make it easy to share your memories.