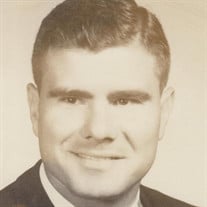 Ferris H. Harmon, 88, of Bogart, GA, passed peacefully to his heavenly reward on Thursday, March 19, 2020. Graveside services will be held on Sunday, March 22, 2020 at 1:00 pm CST at Brush Creek Cemetery in Brush Creek, TN. Pastor Dickie Johnson will officiate. Ferris graduated from Columbia Central High School in Columbia, TN and won the Oakes Award for Athlete of the Year in 1949. As a high school and university student, Ferris played semipro baseball with Monsanto Chemical Company. As a student at Tennessee Tech, Ferris was a ROTC cadet in addition to being a member of the baseball team for 4 years and the football team for 2 years. After graduating from Tennessee Tech in 1954, Ferris worked as the baseball, basketball and football coach at Centerville High School. In 1955, he joined the United States Army Signal Corps as a Second Lieutenant. He was promoted to First Lieutenant with Top Secret Clearance and later served as a Company Commander in Germany. After his military service, Ferris was the principal of Gordonsville High School in Tennessee. For three years, Ferris and his wife, Joann, served together as missionaries in Congo, Africa. Ferris and Joann taught agricultural skills to Congo villagers in addition to sharing the Christian gospel. Upon returning to the United States, Ferris worked as a vocational rehabilitation counselor. He helped establish a training center for the disabled in Lewisburg, TN. He was recognized by the state of Tennessee as the Counselor of the Year in 1973. After relocating to Georgia, Ferris was a Security Officer at South Fulton Hospital. Ferris was an active member of Athens First United Methodist Church. He will be remembered for his reverence for God, devotion to family, and compassion for others. Ferris was preceded in death by his brothers, Wendell Harmon, of Franklin, TN and Kenneth Harmon of Nolensville, TN; and his sister-in-law, Ann Harmon of Franklin, TN. He is survived by his wife of 59 years, Joann Paschall Harmon; three sons, Kevin Harmon (Susan) of Atlanta, GA, Ferris Harmon (Peggy) of Huntsville, AL, and Stephen Harmon (Jana) of Roswell, GA; one daughter, Stephanie Harmon Stapleton (David) of Freeport, FL; eight grandchildren; three great-grandchildren, and his sister-in-law, Barbara Harmon of Nolensville, TN. In lieu of flowers, memorial contributions may be made to Athens First United Methodist Church Missions, P. O. Box 1109, 327 North Lumpkin St., Athens, GA 30603.

The family of Ferris H. Harmon created this Life Tributes page to make it easy to share your memories.

Send flowers to the Harmon family.