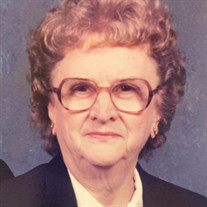 Mrs. Genelle Agee, age 100, of Hickman, TN, passed away on Friday, August 21, 2020. Mrs. Genelle was born October 5, 1919 in Hickman, TN, a daughter of the late Hatton Hickey and Fannie Thomas Hickey. She married Horace Neil Agee on December 29, 1935 and he preceded her in death on July 8, 1998. She was also preceded in death by Brothers; Glen Hickey and Leon Hickey, Sister; Frances Young, Daughter-in-Law; Jane Agee, and Grandchildren; Melinda Carol Agee and Bobby Lynn Leath. She was a 1937 graduate of Gordonsville High School and was the oldest member of the Hickman Baptist Church. She was also a member of the Woman’s Missionary Union and the FCE Club. Mrs. Agee is survived by Son; Bobby G. (Carol) Agee of Portland, TN. Grandson; Dewayne (Michelle) Agee of Portland, TN. Three great-grandchildren; Dustin Agee, Alexis Agee, and Jennifer (Josh) Schock. Six great-great grandchildren; Charlie, Jaxon, Riley, Cohen, Cooper, and Caden. Funeral Services for Mrs. Agee are scheduled to be conducted from the Gordonsville Chapel of Bass Funeral Homes at 2PM on Sunday, August 23, 2020 with Rev. Mark Stinnett and Rev. Russ Stephens officiating. Interment will follow in the Gordonsville Cemetery. Visitation with the family will be at the Gordonsville Chapel of Bass Funeral Homes on Sunday from 11AM until service time at 2PM.

The family of Genelle Agee created this Life Tributes page to make it easy to share your memories.

Send flowers to the Agee family.