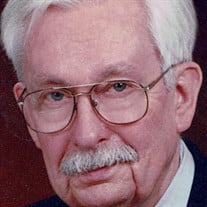 Mr. George Mack Draper, Sr., age 94, of Riddleton, TN, passed away peacefully on Monday, July 3, 2017 after a brief illness. Mr. Draper was born May 20, 1923 in Riddleton, TN, the son of the late Mr. Jerome Mack Draper and Mrs. Cassie Dillard Duke Draper. He graduated from Hopkinsville High School in Kentucky in 1940, and later graduated with honors from Vanderbilt University with a Bachelor’s Degree in Physical Chemistry, and a double minor in Physics and German in 1945. He worked for the R.C. Owen Company for nearly 50 years as a Vice President and Lumber Salesman. He married Wilma Jo Riley Draper on June 21, 1959 and she preceded him in death on March 10, 2011 after 51 years of marriage. A devoted husband, father, and grandfather, he treated his family with the utmost love and respect. During his lifetime, he was an active member of the Methodist Church, where at times he served as a Sunday school teacher, treasurer, and sang in the choir. As a former member of the Athenaeum Society, he researched and presented papers on various topics covering mathematical, historical, and literary fields. An accomplished artist, Mr. Draper served as President of the Hopkinsville Art Guild, and was a member of the Tennessee Art League. He especially loved to draw and had a great ability to express himself through creating portraits with exacting detail. While living in Hopkinsville, he shared his artistic talent by traveling to Ft. Campbell and drawing portraits for soldiers at no charge. In recent years, he enjoyed creating portraits of people in the community he loved to call home. Possessing a curious and inquisitive mind, he was constantly engaged in the pursuit of learning something new, being especially fond of mathematics. Even into his 90’s, he enjoyed solving puzzles and playing Scrabble with his dear friends. He retired to the family farm and built a home on the exact site where several generations have lived before. This decision to leave the city and move to the country proved to be a very happy time in his life. Mr. Draper is survived by three children, Jere Bowen Draper of Corydon, Indiana, George M. Draper, Jr. and wife, Thien Huong Vu Draper, of Madison, Alabama, and Mary Elizabeth Draper, and husband, Gregory Edward Hager of Charlotte, North Carolina. He is survived by two grandchildren, Rebecca Ann Draper and Diana Rose Draper, Brother-in-Law; William Boyd Riley of Adams, Tennessee. He is also survived by numerous friends and loved ones that have supported him through the years. Funeral Services for Mr. Draper are scheduled to be conducted from the Carthage Chapel of Bass Funeral Homes on Friday, July 7, 2017, at 10AM with Mary Draper Hager and George Mack Draper, Jr, eulogizing and Bro. Charles Smith and Bro. Tom Gibson officiating. Interment will follow in the Dixon Springs Cemetery. Visitation with the Draper Family will be at the Carthage Chapel of Bass Funeral Homes on Thursday from 3PM until 7PM and on Friday after 8:30AM until service time at 10AM. The Draper Family requests donations be made to the Chapel Hill United Methodist Church, Riddleton, Tennessee. BASS FUNERAL HOME, CARTHAGE CHAPEL, DIRECTORS.

The family of George Mack Draper, Sr created this Life Tributes page to make it easy to share your memories.