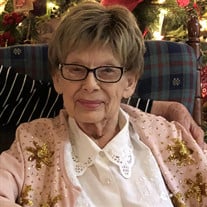 Mrs. Gladys Wade Gibbs of the Cedar Point Community in Smith County, TN, passed away on Saturday, October 12, 2019 at the age of 97. Mrs. Gibbs was born February 14, 1922 in Smith County, TN, daughter of the late Bemon and Ruth White Wade of Elmwood, TN. She married Emmett Cheek Gibbs on July 18, 1953 who preceded her in death on June 26, 2003. Mrs. Gibbs was a graduate of Smith County High School and the LSU School of Banking of the South. She worked for many years at Smith County Bank and retired holding the position of Vice President. Following her career in banking, she was the administrative assistant at the Smith County Soil Conservation Office for 21 years and retired when she was 92. Following this second retirement she moved to Nashville, TN to live with her Granddaughter Elizabeth Anne and later moved to Brentwood, TN to live with her Daughter Mary. Throughout her life, Mrs. Gibbs was very active in her community as a member of the Order of The Eastern Star, the Smith County Fair Board, the Community Advisory Board of Wilson Bank and Trust, Gordonsville FCE Club, and the Cattleman’s Association. Mrs. Gibbs had earned the distinguished award of being a Paul Harris Fellow from Rotary International. She was very proud of continuing ownership of a Tennessee Century Farm. Mrs. Gibbs was a member of the New Salem Missionary Baptist Church and for the last several years had attended the Cedar Point United Methodist Church. Mrs. Gibbs is survived by Daughter Mary Lamoureux and her husband Wes Lamoureux of Brentwood, TN; Grandchildren Elizabeth Anne Wilburn and Stephen Wilburn of Nashville, Step-Grandchildren; Ryan Lamoureux and Russ Lamoureux and wife Constance Zimmer of California. Great-Grandchildren; Marshall Gabriel Dozier of Nashville, TN and Coco Lamoureux of California, Sister; Mary Phillips and Niece; Molly Phillips Goolsby and husband Keith, Great-Niece Amy and Great-Nephews Adam and Abe all from Dixon Springs, TN. Funeral Services for Mrs. Gibbs are scheduled to be conducted at the Carthage Chapel of Bass Funeral Homes on Tuesday, October 15, 2019 at 1PM with Rev. Luanna Tollett officiating. Interment will follow in the Gordonsville Cemetery. Visitation with the family will be at the Carthage Chapel of Bass Funeral Homes on Monday from 3PM until 7PM and again on Tuesday from 11AM until service time at 1PM. In lieu of flowers, the family requests memorials be made to the Cedar Point United Methodist Church or to the Gordonsville FCE Club. BASS FUNERAL HOME, CARTHAGE CHAPEL, DIRECTORS

The family of Gladys Wade Gibbs created this Life Tributes page to make it easy to share your memories.

Send flowers to the Gibbs family.