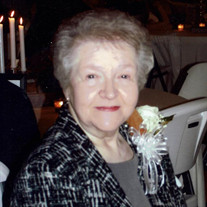 Mrs. Helen Loretta Hawker Malone, age 78 of Alexandria, TN, and a longtime resident of the Hannah’s Branch community went to be with the Lord on Wednesday evening, January 19, 2022. She was a kind, God fearing woman who loved the Lord and loved her family and always wanted the best for them. She was a lifetime member of the Pisgah United Methodist Church and played piano for the choir for many years. Words cannot be expressed how greatly she will be missed. Mrs. Malone was born September 19, 1943 in the Hannah’s Branch community of Dekalb County, TN, a daughter of the late Charles Bratten Hawker and Louise Oakley Hawker. She married Robert Don Malone on January 2, 1960 and he preceded her in death on November 25, 2010. She was also preceded in death by Brother; Danny Hawker. She is survived by two sons; Ricky Donald Malone and his wife, Terry of Liberty, TN, and David Lynn Malone and his wife Genia of Gordonsville, TN. Four grandchildren; Benjamin Tyler (Kayla) Malone of Chestnut Mound, TN, John Weston (Casey) Malone of Baxter, TN, Anna Bess Malone (Trevor) Glover of Alexandria, TN, and Carey Lynn Malone of Gordonsville, TN. Four great-grandchildren; Caleb Oakley Malone, Jackson Everett Malone, Luke Easton Malone, and Harrison Wayne Glover. Brother; Larry Oakley Hawker and his wife, Elaine of Lebanon, TN. Sister-in-Law; Jimmie (David) Carter of Alexandria, TN. Funeral Services for Mrs. Malone are scheduled to be conducted from the Avant Funeral Home on Saturday, January 22, 2022 at 12 noon with Gary Glover officiating. Interment will follow in the Pisgah Church Cemetery. Visitation with the family will be at the Avant Funeral Home on Friday from 12PM until 8PM and on Saturday from 10AM until service time at 12 noon. The family requests memorials be made to the Pisgah Church Cemetery Fund.

Mrs. Helen Loretta Hawker Malone, age 78 of Alexandria, TN, and a longtime resident of the Hannah&#8217;s Branch community went to be with the Lord on Wednesday evening, January 19, 2022. She was a kind, God fearing woman who loved the Lord... View Obituary & Service Information

The family of Helen Loretta Hawker Malone created this Life Tributes page to make it easy to share your memories.

Send flowers to the Malone family.