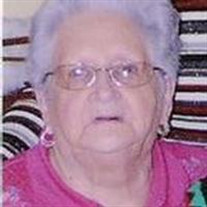 Mrs. Helen Burgess Mabe VanStrander, Age 73 of Alexandria, TN., died Thursday, April 15, 2010 at University Medical Center, Lebanon, TN. Mrs. Van Strander was born May 17, 1937 in Brush Creek, TN., the daughter of the late Nellie Anne Howell and Harvey McMillian Burgess. She was married on October 10, 1953 to Johnny Franklin Mabe and he preceded her in death on March 14, 1993. A daughter, Mary Christine Mabe preceded them in death on December 28, 1960 and a son, Steve Mabe, Sr. preceded her in death on March 22, 2008. She was later married to Richard Van Strander on November 25, 1994. She worked for Wilson County Shirt Company in Watertown and later at Kroger’s in Lebanon. She was a homemaker and did many quilt in lifetime. She was a member of the Auburntown Church of Christ. Mrs. Van Strander is survived by her husband, Richard Van Strander of Alexandria, TN. Son and Daughter-in-Law: Larry and Janet Mabe of Chicago, IL. Grandson, Steve Mabe, Jr. and his wife, Rachel of Smithville, TN. Granddaughters: Monika Mabe and Tabitha Mabe of Chicago, IL. Great Grandsons: Heath Mabe and Lance Mabe of Smithville. Brothers, Eldon (Carol) Burgess of Cookeville, TN and Billy (Linda )Burgess of Brush Creek, TN. Sisters: Ann (Lee) Armstrong of Nashville, TN and Wanda (Sidney) Williams of Brush Creek, TN. Mrs. VanStrander’s remains are at the Avant Funeral Home, Alexandria, TN., where Funeral services will be held on Monday, April 19, 2010 at 11:00 A.M. with David Dunn and Glenn Ramsey, officiating. Interment will follow in Brush Creek Cemetery, Brush Creek, TN.The VanStrander family will receive friends at the Avant Chapel on Sunday from 11:00 A.M. to 8:00 P.M. and on Monday from 10:00 A.M. until service time at 11:00 A.M.

The family of Helen VanStrander created this Life Tributes page to make it easy to share your memories.

Send flowers to the VanStrander family.