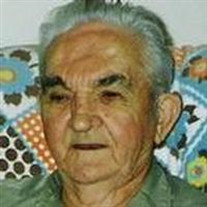 Mr. Howard D. Woodard, Age 88 of the Pea Ridge Community, died Friday, October 30, 2009 at Riverview Regional Medical Center, Carthage, TN. Mr. Woodard was born January 29, 1921 in Jackson County, Tennessee, the son of the late Almeda Allen and Arthur Woodard. He was preceded in death by his siblings: Lucille Pope, Sylvester “Buck” Woodard, Baxter Woodard, Reggie Woodard and Arthur Eugene Woodard. He was a Veteran of World War II. He was married on December 20, 1938 to Thulia Watts, who preceded him in death on September 18, 2006. A Grandson, Travis Nixon preceded him in death. He worked as a laborer for TVA and was a farmer. He was a member of the Chestnut Mound Missionary Baptist Church. Mr. Woodard is survived by a Daughter and Son-in-Law, Beverly and Floyd “Frosty” Angel of Pea Ridge. Granddaughter: Kristi Scurlock and her husband, Randy of Pea Ridge. Three Great Grandchildren: Gage Scurlock, Madison Scurlock and Dillan Nixon. Funeral Services for Mr. Woodard will be held at the Carthage Chapel of Bass Funeral Homes on Monday, November 2, 2009 at 2:00 P.M., conducted by Elder Charles Allen Gentry. Interment will be in the Chestnut Mound Baptist Church Cemetery, Chestnut Mound, TN.The Woodard family will receive friends at the Carthage Chapel on Sunday from 1:00 P.M. to 8:00 P.M. and on Monday from 10:00 A.M. until service time at 2:00 P.M.Memorials may be made to the Travis Nixon Scholarship Fund.

The family of Howard Woodard created this Life Tributes page to make it easy to share your memories.

Send flowers to the Woodard family.