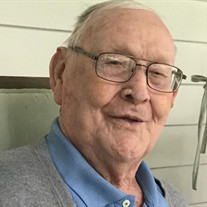 Mr. Ivy C. Agee, Jr, age 96 of Gordonsville, TN, passed away Monday, December 16, 2019. Mr. Agee was born April 3, 1923 in Gordonsville, TN, a son of the late Ivy C. Agee, Sr, and Hettie Lucille Gwaltney Agee. He was also preceded in death by Son; Dan Oliver Agee on April 18, 2009. He attended school in Gordonsville for eleven years until Coach Turney Ford recruited him to attend BGA in Franklin, TN, and play sports his Senior year where he excelled in football and baseball until his graduation. After high school, Mr. Agee attended the Bliss Electrical School. He married Virginia Lester on June 7, 1942. Mr. Agee worked as an electrician, a lifelong farmer, and as Extrusion Supervisor at Bonnell Aluminum. He was very active in the community, being a member of the New Middleton Masonic Lodge #249 F&AM, and was a Charter Member of Southside Lions Club. Mr. Agee was also a member of the Gordonsville United Methodist Church. Mr. Agee served his country in the U.S. Army during World War II, and obtained the rank of Sergeant. He was a member of the 29th Infantry Division – Battery B, and the 111th Field Artillery. Mr. Agee was a member of the first wave of Allied troops that landed on the beaches of Normandy on D-Day. He also served at Ardennes, Rhineland, and Central Europe. In recognition of his service, he obtained the following medals: French Legion of Honor, Bronze Star, Silver Star, Good Conduct Medal, French Croix de Guerre with Palms, European-African-Middle Eastern Campaign, WWII Victory, Army of Occupation, and Army Presidential Citation. He never wavered from his love and devotion to his family, friends, God, and his country. His family will miss him, but will always hold the deepest love and respect for him. Mr. Agee is survived by his Wife of 77 years; Virginia L. Agee of Gordonsville, TN. Daughter; Celia (Morton) Stein of Franklin, TN. Grandchildren; Matt (Dana) Stein, Jake (Rhea Reeves) Stein, Amanda (Tommy) Dillehay, and Daniel Agee. Great-Grandchildren; Jonah (Sarah Creasy) Stein, Maura Stein, and Kelsi (Dylan) Davis. Great-Great Grandson; Ryder Stein. Funeral Services for Mr. Agee are scheduled to be conducted from the Gordonsville Chapel of Bass Funeral Homes on Thursday, December 19, 2019 at 2PM with Bro. Floyd Massey officiating and Jane Bass Turner delivering the Eulogy. Interment with Military Honors will follow at the Gordonsville Cemetery with Bro. Dickie Johnson officiating. Visitation with the Agee Family will be at the Gordonsville Chapel of Bass Funeral Home on Wednesday from 4PM until 6PM and on Thursday from 12PM until service time at 2PM. The Family requests memorials in Mr. Agee’s memory be made to the Gordonsville United Methodist Church or to Smith County Habitat for Humanity. BASS FUNERAL HOME, GORDONSVILLE CHAPEL, DIRECTORS.

The family of Ivy C. Agee Jr. created this Life Tributes page to make it easy to share your memories.

Send flowers to the Agee family.