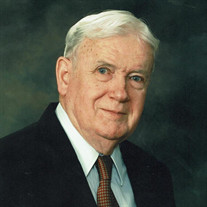 Funeral Services for Smith County, TN, native James Lillard Bass, Jr, will be held at 2PM on Sunday, May 24, 2020 at the Carthage Chapel of Bass Funeral Homes, conducted by Rev. Jerry Wallace and Rev. Monica Mowdy with eulogy delivered by his daughter, Jane Bass Turner. Burial will follow in the Gordonsville Cemetery. Visitation with the family will be at the Carthage Chapel of Bass Funeral Home on Saturday from 3PM until 8PM and on Sunday from 10AM until service time at 2PM. Mr. Bass passed away on Thursday, May 21, 2020, two weeks before his 99th birthday. He was 98 years of age. A son of the late J.L. and Linnie Gibbs Bass, he received his early education in the Smith County School system graduating from Gordonsville High School in 1939. He enrolled in Cumberland University to continue his education which was interrupted by America’s entry into World War II. While at Cumberland University he helped pay his tuition by waiting (hopping) tables in the university’s dining room. During World War II he served as a radio operator and aerial gunner on a heavy bomber assigned to the U.S. Army Air Crops stationed with the 8th Air Force in Conington, England with the 457th Bomb Group. In preparation for his assignment he went through basic training by what he called was the toughest drill sergeant in the Army. He then took an extensive course in radio operation and maintenance and procedure at an army facility in Sioux Falls, SD. It was here he learned the International Morse Code. Aerial Gunnery school followed in Yuma, AZ. In combat he participated in the Battle of the Bulge, the Rhineland Offensive, and the Central Europe Campaign. For his service he was awarded the European, African, and Middle East Campaign Medal with battle stars, the Air Medal with clusters, the Victory Medal, and the French Foreign Legion Medal of Honor, the highest honor bestowed by the French Government for his role in liberating French POW’s. Concerning his service in the Armed Forces he said “I was proud to have served. I was aware that I was part of a larger effort that would have a lasting impact on the world. If we had not stepped up when we did and Hitler had been successful, we would be living in a very different world at this time.” After the conclusion of the war he continued his education with an undergraduate degree from the University of Tennessee at Knoxville in 1947. He entered law school at Vanderbilt University and graduated in 1949, beginning a long career in law. He remained active until May 8, 2020. Mr. Bass was instrumental in the formation and development of the Smith Utility District. Funds for the formation and development of public works projects were scarce in the early 1960’s; however he looked for and found a favorable source of financing to start the project. He has looked with pride with the development of the District and provided legal services to the district for more than 50 years. He was also active in helping secure funds for rural telephone systems to bring modern telephone service to rural areas and served as legal counsel for more than 50 years to a trade association, NTCA, whose membership consisted of rural telephone systems located all across the nation. He served on the Smith County Industrial Board, and prepared the Articles of Incorporation and bylaws of the Industrial Board, the Smith County Chamber of Commerce, and the Smith County Heritage Museum. He was a longtime member of the Carthage United Methodist Church where he taught adult Sunday School Class for a number of years and was active at all levels of the Methodist Church. He is the author of a historical account of the 457th Bomb Group and a history of the rural telephone program. He was also a licensed funeral director in the State of Tennessee and at the time of his death was the oldest licensed funeral director in the state. In addition to his parents, he was preceded in death by his wife of 62 years; Erma Elizabeth Armistead Bass, Son; John Lillard Bass, Siblings; Paul B. Bass, Bernie S. Bass, and Cara Duncan Bass. He is survived by two children; James David (Dawn) Bass of Carthage, TN, and Jane Elizabeth (Larry) Turner of Gordonsville, TN. Grandchildren; Emily Jane Bass, James Gregory Bass, Lilly Katherine Turner, and Steven (Kerri) Clemons. Special Friend; Tiffany Angel. The family requests memorials be made to the Carthage United Methodist Church Memorial Fund or a charity of your choice. Due to COVID-19, no food or drink will be accepted at the funeral home.

Funeral Services for Smith County, TN, native James Lillard Bass, Jr, will be held at 2PM on Sunday, May 24, 2020 at the Carthage Chapel of Bass Funeral Homes, conducted by Rev. Jerry Wallace and Rev. Monica Mowdy with eulogy delivered by his... View Obituary & Service Information

The family of James L. Bass created this Life Tributes page to make it easy to share your memories.

Send flowers to the Bass family.