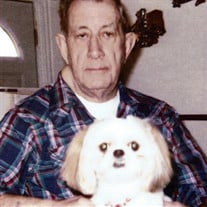 Mr. James Boyd “Boots” Ezell was born January 29, 1930 to William Floyd Ezell and Pearl James Ezell in Christian County, KY, as the younger brother to W.C. Ezell, all of whom precede him in death. Boots died on December 25, 2019 from his temporary home at The Pavilion, Carthage Assisted Living, with family surrounding him in presence and thought. He was a little over a month reaching his 90th birthday. Boots graduated from Christian County High School in 1948 and immediately moved to Detroit, MI, to find work having had his fill of share-crop farming. While living in Detroit, Boots met and married Ruth Maynard from Lancaster, TN, in his early years. Their union produced three children, Karen Yvonne, Ricky Boyd, and Anthony Scott. After their separation, Boots continued to live in Detroit, MI, where he worked for The Coca Cola Company for a period of time and later joined ACCO Systems, Inc, from whom he retired on January 1, 1988 after decades of service. Boots never remarried. Boots enjoyed all kinds of animals. He especially enjoyed dogs and often shared fond memories of his childhood pet, Popeye. Popeye was his constant companion while he battled rheumatic fever and asthma. Remembering Popeye’s faithfulness, he ensured that all of his “granddogs” had treats for daily snacks. As a childhood resident of the Bluegrass State, he continued to follow the Kentucky Derby each year until his death. He enjoyed antiquing, country music, and especially enjoyed listening to Hank Williams, Sr, at full volume….as he had a hearing problem….when cruising in his truck. A strong and independent man, Boots lived on his own until three months prior to his death. Boots is survived by his Children, Karen Yvonne Lynn (Joe) of Celina, TN; Ricky Boyd Ezell (Helen) of Lancaster, TN; and Anthony Scott Ezell (Kim) of Lancaster, TN. He is also survived by grandchildren: Olivia Ruth Lockhart (Mitch); Sarah Corrine Miller (Carson); Caleb Scott Ezell (Haley); Stacy Herd (Jessica); Ken Herd (Holly); Scott Lynn (Julie); Todd Lynn (Jennifer); ten great-grandchildren; three nephews, one niece, cousins and three “granddogs.” Graveside services and Interment for Mr. Ezell are scheduled to be conducted at the Gordonsville Cemetery on Friday, December 27, 2019 at 11AM with services held by Sons, Scott Ezell and Ricky Ezell. Visitation with the Family will be at the Gordonsville Chapel of Bass Funeral Homes on Friday from 9AM until departure for the cemetery at 10:45AM. BASS FUNERAL HOME, GORDONSVILLE CHAPEL, DIRECTORS

The family of James Boyd "Boots" Ezell created this Life Tributes page to make it easy to share your memories.

Send flowers to the Ezell family.