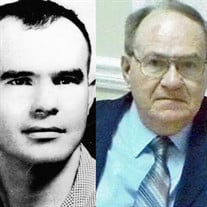 Mr. James Donald Dickens, Age 81 of New Middleton, TN, passed away Wednesday, September 13, 2017. Mr. James was born April 5, 1936 in the Elmwood Community, the son of the late Otis Carter Dickens and Mattie Thelma Franklin Dickens. In December of 1958, he was drafted into the U.S. Army where he trained at Ft. Knox, Kentucky, Ft. Still, Oklahoma, and Ft. Lee, Virginia. He was honorably discharged on November 30, 1964. On June 18, 1960, he was united in marriage to Chloe Katheryn Frye at the Brush Creek Primitive Baptist Church by Elder E.S. Frye. James was a retired sales merchandiser for the Sav-a-Stop and McLane Companies where he had worked for 25 years. In November of 1992, he began working as night manager at the Carthage Bestway Grocery where he worked in that capacity until February 2002. He continued to work part-time taking care of the health and beauty aid section of the store for several years. After retirement, he worked part-time at the Gordonsville Shoprite until February of 2015. As a teenager he professed a hope in Christ and joined the First Baptist Church in Carthage, TN. For the past fifty-seven years, he had faithfully attended the Hickman Primitive Baptist Church. He was preceded in death by two sisters; Polly Givens and Helen Thomas, Brother; Bobby Dickens. Half-Sisters; Ada Hunter and Hester Dickens, and Half-Brother; Paschall Dickens. Survivors include his wife of Fifty-seven years, Katheryn Frye Dickens; two daughters, Laurie (Russell) Napier and Lucie (Randy) Petty; four grandchildren, Amy (Jonathan) Enoch, Jonathan Napier, Andrew Napier, and Rachel Petty, three great-grandchildren; Elisabeth, Noah, and Anna Enoch. Funeral Services for Mr. Dickens are scheduled to be conducted from the Gordonsville Chapel of Bass Funeral Homes on Saturday, September 16, 2017 at 1:30PM with Randy Petty officiating and Rachel Petty delivering the Eulogy. Interment will follow in the Brush Creek Memorial Gardens. Visitation with the Dickens family will be held at the Gordonsville Chapel of Bass Funeral Homes on Friday from 2PM until 8PM and again on Saturday from 11AM until the time of the service at 1:30PM. The family requests memorials be made to the Hickman Primitive Baptist Church. BASS FUNERAL HOME, GORDONSVILLE CHAPEL, DIRECTORS.

The family of James Donald Dickens created this Life Tributes page to make it easy to share your memories.

Send flowers to the Dickens family.