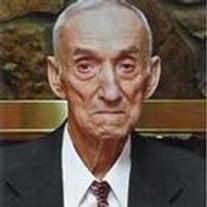 Mr. John Edward Scruggs, Age 86 of the Clubb Springs Community of Smith County, TN., died Monday, July 27, 2009 at St. Thomas Hospital, Nashville, TN. Mr. Scruggs was born December 9, 1922 in the Clubb Springs Community, the son of the late Edna Elizabeth Bellar and Robert Allen “Bob” Scruggs. A Sister, Doris and her husband, Sam Haile of Castalian Springs preceded him in death. After Pearl Harbor every young man was required to register for service at the age of 18. He was called into service on February 25, 1943, entering the United States Army as a PFC raising to the rank of Staff Sergeant, he was awarded the Good Conduct Medal, European Theater Ribbon w/three bronze service stars, the American Theater Ribbon and the Bronze Star Medal and serving 11 months in Northern France and Central Europe before his discharge on November 5, 1945. He was married to Geneva Gentry on August 4, 1945. He was saved on August 16, 1945 and united with the New Macedonia Missionary Baptist Church and has been an active member since that time and was a Deacon for several years. He was a long time farmer and drove a bus for the Smith County Educational System and later worked several years with the Smith County Highway Department. Survived by his wife of 63 years, Geneva Gentry Scruggs. Daughter and Son-in-Law, Gail Scruggs Hewitt and Robert “Bobby” Hewitt of Carthage, TN. Granddaughter, Nicole Hewitt Williams and her husband Bobby of Brush Creek, TN. Grandson, John Scott Hewitt and his wife Shelly of Lafayette, TN. Two Great Granddaughters: Kendall Nicole Williams and Abigail Elizabeth Hewitt. Sister, Willodean Scruggs of Buffalo Valley, TN. Mr. Scruggs’ remains are at the Gordonsville Chapel of Bass Funeral Homes where Services will be held on Wednesday, July 29, 2009 at 2:00 P.M. with Elder Charles Allen Gentry and Elder Ricky Holland, officiating. Interment with Military Honors will be at the Smith County Memorial Gardens, Carthage, TN., with Elder Jason Wheeley, officiating.The Scruggs family will receive friends at the Gordonsville Chapel on Tuesday from 2:00 P.M. to 8:00 P.M. and on Wednesday from 10:00 A.M. until service time at 2:00 P.M.Memorials may be made to the New Macedonia Missionary Baptist Church.

The family of John Scruggs created this Life Tributes page to make it easy to share your memories.

Send flowers to the Scruggs family.