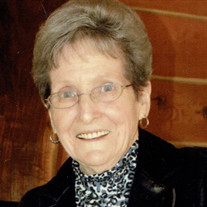 Mrs. Juanita Sircy Bennett Selph, age 76, of Carthage, TN, and a longtime resident of Gordonsville, TN, passed away on Wesdnesday, January 30, 2019. Mrs. Juanita was born May 28, 1942 in Elmwood, TN, a daughter of the late Jilson Sircy and... View Obituary & Service Information

The family of Juanita Bennett Selph created this Life Tributes page to make it easy to share your memories.

Send flowers to the Selph family.