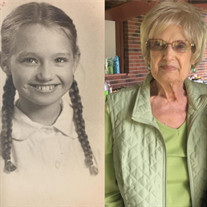 Mrs. Katheryn Frye Dickens, age 76, of New Middleton, TN, passed away peacefully at her home on Saturday, June 30, 2018. Born Chloe Katheryn Frye on September 2, 1941 at the Martha Gaston Hospital in Wilson County, TN, she was the only child born to the late Dalton Odell Frye and Mattie Frances Neal Frye. Having attended elementary school at Brush Creek, Alexandria, and New Middleton, she was a 1959 graduate of Gordonsville High School. She was the Class Valedictorian and was voted the Most Dignified Senior Girl and the Most Studious Senior Girl. Her daughter, Lucie, was Valedictorian in 1984, and her granddaughter, Rachel, was Valedictorian in 2014. Katheryn attended Cumberland University, and she was a graduate of Tennessee’s first Public Library Management Institute. In 2000, she received the Southside Lions Club Good Citizen Award for providing reading opportunities for patrons in the Gordonsville Public Library. On June 18, 1960, she was united in marriage to James Donald Dickens at the Brush Creek Primitive Baptist Church by her great uncle, Elder E.S. Frye. Their marriage lasted 57 years until death claimed James on September 13, 2017. Katheryn joined the Hickman Primitive Baptist Church in July of 1965. She was elected church clerk in April of 1967 and has continued to serve in that capacity. For twenty years, she worked as a part-time secretary and bookkeeper for Carter Hardware in Carthage, TN. In November of 1982, she began working as the Postmaster Relief at the Gordonsville Post Office and worked in that position for ten years. In 2004, she retired as librarian at the Gordonsville Public Library where she had worked for twelve years. Katheryn was an avid reader and enjoyed doing historical research. Her numerous historical articles have been printed in various publications. Survivors include two Daughters; Laurie (Russell) Napier and Lucie (Randy) Petty. Four Grandchildren; Amy (Jonathan) Enoch, Jonathan Napier, Andrew Napier, and Rachel Petty. Three great-grandchildren; Elisabeth, Noah, and Anna Enoch. Funeral Services for Mrs. Dickens are scheduled to be conducted from the Gordonsville Chapel of Bass Funeral Homes on Monday, July 2, 2018 at 2PM with Rachel Petty delivering the Eulogy and Randy Petty officiating. Interment will follow in the Brush Creek Memorial Gardens. Visitation with the Dickens Family will be on Sunday from 11AM until 8PM and again on Monday from 10AM until service time at 2PM. Memorials in Mrs. Katheryn’s memory may be made to the Hickman Primitive Baptist Church or to the library of your choice. BASS FUNERAL HOME, GORDONSVILLE CHAPEL, DIRECTORS.

Mrs. Katheryn Frye Dickens, age 76, of New Middleton, TN, passed away peacefully at her home on Saturday, June 30, 2018. Born Chloe Katheryn Frye on September 2, 1941 at the Martha Gaston Hospital in Wilson County, TN, she was the only child... View Obituary & Service Information

The family of Katheryn Frye Dickens created this Life Tributes page to make it easy to share your memories.

Send flowers to the Dickens family.