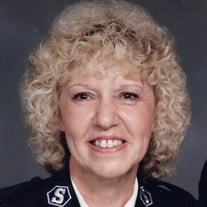 Jeanna LaRay Hieronimus,79, of Carthage, Tennessee passed away, in her home, on Friday July 30, 2021. LaRay is survived by her husband of 59 years, Alva Hieronimus, her two sons, and daughters-in-law, Raymond and Mary Hieronimus, and Greg and Amanda Hieronimus, and her grandson James Hieronimus. On August 5,1941 LaRay was born to loving parents, James and Dorothy Wiseman. She was preceded in death by her brother, James (Coke) Wiseman. LaRay was survived by her siblings, Wilma Boggess, Ruth Shafer, Karen (Sue) Fetters, Clarence Wiseman, and Carlene Shively. LaRay met her future husband, Alva, when they attended Waterloo High School together. She graduated in 1959 and took a job as a keypunch operator at Ashland Oil. On March 19,1962, she married her sweetheart in Clintwood, Virginia. On December 31 of that year, she and Alva began their family with their first son, Raymond being born to the newlyweds. Four years later, on June 19,1966, their family grew when they gave birth to their youngest son, Greg. LaRay and Alva lived in Norfolk, Virginia, and Winston-Salem, North Carolina, but it was Tennessee that became their home. The name LaRay means grace, and she embodied that meaning in her service to the lord through her time with the Salvation Army. Her church family weren’t the only ones to witness her kind spirit, though. LaRay was a mother to all that she met. As a dedicated homemaker she opened her home to her nieces and nephews, her son’s friends and her grandson, James. Being a Sunday School teacher at the Salvation Army gave her the opportunity to show love and teach the children in her church community. Her family was her world. LaRay enjoyed gardening, and no matter where she called home you would find beautiful flowers, and succulents greeting you. She loved to travel, hike, and cross-stitch. From her time with the Salvation Army, providing a safe home space for those in her life, to her volunteer work with the Smith Co. Help Center, LaRay spent her life helping those in need. Graveside Services and Interment for Mrs. Hieronimus are scheduled to be conducted on Thursday, August 5, 2021 at 2PM at the Ridgewood Cemetery. The family and friends will gather at the cemetery just prior to the 2PM graveside service. The family requests that if you choose to donate instead of flowers that you do so to New Middleton Baptist Church, where she and Alva were members, or to the National Alliance of Mental Illness at www.nami.org.

Jeanna LaRay Hieronimus,79, of Carthage, Tennessee passed away, in her home, on Friday July 30, 2021. LaRay is survived by her husband of 59 years, Alva Hieronimus, her two sons, and daughters-in-law, Raymond and Mary Hieronimus, and Greg and... View Obituary & Service Information

The family of LaRay Hieronimus created this Life Tributes page to make it easy to share your memories.

Send flowers to the Hieronimus family.