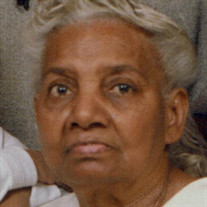 Mrs. Lena Mae Clay Sadler, also known as Mama Lena, age 95 of the Stonewall Community, departed this earthly home on Tuesday night, May 26, 2020 at 8PM to enter into her heavenly home where the best is yet to come. Mrs. Lena was born March 24, 1925 in the Martin’s Creek Community of Jackson County, TN, the oldest of seven children, to the late Leslie Clay and Edna McKinley. Lena Mae grew up in the Laurel Hill Community in the Buffalo Valley area. She attended school in Putnam County. On February 10, 1945 she met and married Robert “Dodjum” Sadler and made their home in Granville, TN. To this union four boys were born. They moved to the Stonewall Community of Smith County, TN, in 1956, where she joined Ballard Chapel United Methodist Church and served as an usher for many years until her health began to fail her. In 1965 Mama Lena was employed by B&B Drive-In, where she made the best hamburgers ever for 21 years. She was a kind-hearted loving lady and never spoke a bad word of anyone. She really loved babies and young kids. She would light up like a Christmas tree when she would see them. She was preceded in death by her husband, Robert “Dodjum” Sadler, who passed May 5, 1999 and a Son, James “Big Jim” Sadler, who passed June 20, 2014. She is also preceded in death by Sister; Elizabeth Wester, and three brothers; Jack Clay, Johnny Wester, and Ned Clay. Two extended sisters; Myrtle Tillman and Gladys Rucks. Two extended brothers; James A. Hayes and Donald Hayes. She is survived by the loving and devoted sons; Thomas R. Sadler, Curtis E. Sadler, and Hugh E. (Clara) Sadler, all of Stonewall, TN. Two loving granddaughters; Bridgett and Tanisha. Two great-grandchildren; Kane and Kailey. One Sister; Veleda Hogan Smith of Carthage, TN. One Brother; Charlie King (Mary) Wester of Cookeville, TN. One sister-in-law; Annie Clay of Nashville, TN. Extended son; Charles Skillion of Murfreesboro, TN. A very devoted cousin; Olivia Gregory of Bethpage, TN, a devoted neighbor and cousin; Loretta Hogan of Stonewall, TN. Many other nieces, nephews, cousins, and friends and her loving church family. We, the family of the late Mama Lena Mae Sadler, would like to take this time to express our sincere thanks and appreciation for all the prayers, expressions of love, kindness and other acts of sympathetic concern during our hours of bereavement. Special thanks to the doctors and nurses at Riverview Regional Medical Center and Bass Funeral Home. May God in his infinite goodness and mercy continue to bless each of you. Funeral services for Mrs. Sadler are scheduled to be conducted on Sunday, May 31, 2020, at 1PM at the Gordonsville Chapel of Bass Funeral Home with Pastor Willie Cameron and Pastor Wilkie Winfree. Interment will follow in the Ballard’s Chapel United Methodist Church Cemetery. Visitation with the Family will be at the Gordonsville Chapel of Bass Funeral Homes on Sunday from 11AM until service time at 1PM. In lieu of flowers, the family requests memorials be made to the Ballard Chapel United Methodist Church. BASS FUNERAL HOME, GORDONSVILLE CHAPEL, DIRECTORS

Mrs. Lena Mae Clay Sadler, also known as Mama Lena, age 95 of the Stonewall Community, departed this earthly home on Tuesday night, May 26, 2020 at 8PM to enter into her heavenly home where the best is yet to come. Mrs. Lena was born March... View Obituary & Service Information

The family of Lena Mae Sadler created this Life Tributes page to make it easy to share your memories.

Send flowers to the Sadler family.