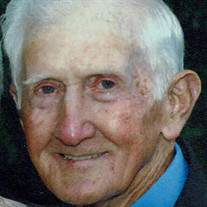 Mr. Robert Nelson Smith, age 85, of Hickman, TN, passed away Saturday, October 28, 2017. Mr. Nelson was born May 8, 1932 in the Sykes Community of Smith County, TN, the son of the late William Robert “Bill” Smith and Callie Hatton Agee Smith. He was also preceded in death by Brother; John Donald Smith. Mr. Nelson served his country in the U.S. Army. He married Jean Rollins on April 1, 1956. Mr. Nelson worked for the JMZ Mine, Williams Refrigeration, and also for the Smith County Board of Education as a bus driver. He was a lifelong farmer and had also served as commissioner for the Smith County Court. Mr. Nelson was a member and Deacon of the Hickman Baptist Church. Mr. Smith is survived by his Wife of 61 years; Jean Rollins Smith of Hickman, TN. Sons; Robert Lee (Jackie) Smith of Hickman, TN, and Ronnie (Lisa) Smith of Brush Creek, TN. Grandchildren; Cara Clay Fleenor of South Carthage, TN, and Hillary (Dusty) Miller of Sykes, TN. Great-Grandchildren; Chloe Layne Fleenor and Lyla Jayne Miller. Funeral Services for Mr. Smith are scheduled to be conducted from the Hickman Baptist Church on Monday, October 30, 2017 at 2PM with Jerry Craighead, Mark Medley, and Bro. Mark Stinnett officiating. Interment will follow in the Hickman Cemetery. Visitation with the Smith family will be held at the Gordonsville Chapel of Bass Funeral Homes on Sunday from 12 Noon until 8PM and again on Monday at Hickman Baptist Church after 10AM until the time of the service at 2PM. The Smith Family requests donations in Mr. Nelson’s memory be made to Hickman Baptist Church. BASS FUNERAL HOME, GORDONSVILLE CHAPEL, DIRECTORS.

The family of Nelson Smith created this Life Tributes page to make it easy to share your memories.