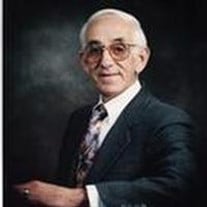 Reverend Orlie J. Wood, Age 78 of Gordonsville was called home to be with the lord on November 3, 2008.Rev. Wood was born May 2, 1930 in Brotherton , TN, the son of the late Jesse Ellis and Sarah Bell Brewer Wood. He was also preceded in death by Four Brothers; Ernest, Edgar, Oscar, and Aubrey Wood., and One Sister; Ada Randolph.He was a Veteran of the Korean War serving in the United States Army from November 29, 1951 to retiring on June 6, 1962. He was married on August 1, 1948 to Arlene Dodson. He operated the Woodjammer Restaurant in Gordonsville several years and later open and operated O. J. Restaurant also in Gordonsville.He served the Lord Jesus Christ preaching God’s word for 46 years. Following in the footsteps of his Father and one Brother who were Baptist Ministers, His love for the Lord was a blessing to all that knew him. Bro. Wood life in Christ started when He was saved in 1962 surrendering to preach in July of that year and on December 2, 1962 was licensed to preach and ordained by the Fountain Head Baptist Church, Portland, TN. His first sermon was at Pleasant Valley Baptist Church in Sumner County. He became Pastor of Rome Baptist Church in 1965, from there He went to Portland to start for First Baptist Church a mission which is now Oak Baptist Church. He then became Associate Pastor and Minister of Visitation at Dickerson Road Baptist Church. Then He was called as Pastor of First Baptist Church, Gordonsville where during his Pastorate the present day Sanctuary and Educational wing were built. Then he went to Eastwood Baptist Church in Nashville and came back to Gordonsville First before becoming Pastor at Upper Helton Baptist in Alexandria where a new Sanctuary was built during his tenure there. His last full-time pastorate was at Carthage Road Baptist Church retiring there after 42 years of full time work in the Lord’s service.Rev. Wood is survived by his wife of 60 years, Arlene Wood of Gordonsville. Six Children Carol (Danny) Cook of Franklin,KY, Sharon (James) Bush of New Middleton, TN, Janet (Eddie) Thomas of Hickman, TN, Terry Wood and Spouse Steve Lange of Los Angeles, CA, Pam (Bob) Malone of Hickman, TN, and Lewis Wood of Carthage, TN. Ten Grandchildren: Jimmy Cook, Michelle Henderson, Jonathan Bush, Matthew Bush, Jana Stone, Jill White, Livia Lange, Dustin Malone, Chase Malone, and Blake Wood. Seven Great Grandchildren: Michael and Leslie Cook, Tyler Botts, Katie and Andrew Henderson, Addilyn Bush, and Trevor Dixon.. Three Sisters: Ova Dell Kellough of Alabama, Lillie Mae Boswell of Monterey, TN, and Maxine Lewis of Gallatin, TN. Funeral Services were held on Friday, November 7, 2008 at the Gordonsville First Baptist Church, where Rev. Wood was a member and former pastor. Bro. Ben Garner, Bro. Jason Lahorn and his nephew, James Lewis officitatied and eulogies were given by David Haynes and James Vaden. Interment was in Gordonsville Cemetery with Military Honors. Rev. Wood’s Grandsons served as Pallbearers, with Honorary Pallbearers being the Adult Men Sunday School Class of Gordonsville First Baptist Church. Memorials may be made to the Orlie J. Wood Building Fund at the Gordonsville First Bapist Church, P. O. Box 98, Gordonsville, TN. 38563-0098 which is named in his honor.

Reverend Orlie J. Wood, Age 78 of Gordonsville was called home to be with the lord on November 3, 2008.Rev. Wood was born May 2, 1930 in Brotherton , TN, the son of the late Jesse Ellis and Sarah Bell Brewer Wood. He was also preceded in death... View Obituary & Service Information

The family of Rev. Orlie J. Wood created this Life Tributes page to make it easy to share your memories.

Send flowers to the Wood family.