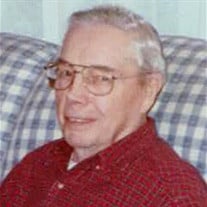 Mr. Ralph Emerson Williams, Sr, age 91, of West Chester, OH, and a native of Smith County, TN, passed away Friday April 14, 2017. Mr. Williams was born July 7, 1925 in Smith County, TN, the son of the late Haskell Williams and Naomi Smith. He married Betty Jewel Taylor on June 17, 1950 and she preceded him in death on June 26, 2011. Mr. Williams was also preceded by Brother; Harold Williams, Sister; Billie Sircy, and infant sister; Syble Williams. He worked in with heavy equipment as a mechanic and was part of the construction of super highways I-71 and I-75 in Ohio. Mr. Williams was a 50 year member of the New Middleton Masonic Lodge #249 F&AM. Mr. Williams is survived by Sons; Ralph Emerson (Regenia) Williams, Jr., and Terry Marc (Gayla) Williams. Grandchildren; Brandon, Brittany, Kevin, Michael, and Ashley. Four Great-Grandchildren; Cheyenne, McKenzie, Pasley Jewel, and Kaia. Sister-in-Law; Barbara Williams. Graveside Services and Interment with Masonic graveside services for Mr. Williams are scheduled to be conducted from the Gordonsville Cemetery on Tuesday, April 18, 2017 at 11AM with Bro. Bobby Peoples officiating. Visitation with the Williams family will be held at the Gordonsville Chapel of Bass Funeral Homes on Tuesday from 10AM until departure for the cemetery at 10:50AM. BASS FUNERAL HOME, GORDONSVILLE CHAPEL, DIRECTORS.

The family of Ralph Emerson Williams Sr. created this Life Tributes page to make it easy to share your memories.