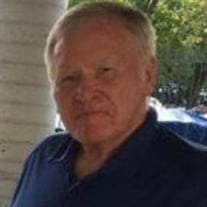 Mr. Richard Thomas Russell, III, age 72, of Portland, TN, passed away on Tuesday, June 2, 2020. Richard was born October 9, 1947 in Murfreesboro, TN, a son of the late Richard T. Russell, Jr, and Hazel Perry Russell. He was a 1966 graduate of Sandy Springs High School in Atlanta, GA. He married Wanda Gillespie on September 1, 1972 in Murfreesboro, TN. Mr. Russell retired from Bridgestone after working for 34 years as a production scheduler. Richard found much joy in retirement with his loving wife and a new beekeeping passion and community of friends, many weekends at their honey booth at local farmer’s markets, time relaxing at their Florida home, and much fun with their many grandchildren. Richard was active in the Portland area, making many friends with his Mennonite neighbors, and was a member of First Baptist Church, Portland. Mr. Russell is survived by Wife of 47 years; Wanda Russell of Portland, TN. Three Children; Thomas (Ceselie) Russell of Covington, GA, Stephen (Audrey) Russell of Brush Creek, TN, and Emily (Grant) Williams of Knoxville, TN. Nine Grandchildren; Julia, Alaina, Olivia, Amelia, Titus, Natalie, Timothy, Thomas, and Evelyn. Brother; Robert (Melinda) Russell of Murfreesboro, TN. Nephew; Michael (Dawn) Russell, and niece; Angela (Glenn) Winnier. Funeral services for Mr. Russell are scheduled to be conducted at the Gordonsville Chapel of Bass Funeral Homes on Thursday, June 4, 2020, at 11AM with Bro. Andy Mathias officiating. Interment will follow in the Gordonsville Cemetery. Visitation with the Russell Family will be at the Gordonsville Chapel of Bass Funeral Homes on Wednesday from 4PM until 8PM and again on Thursday from 10AM until service time at 11AM. In lieu of flowers, the family requests memorials be made to the American Cancer Society or the First Baptist Church, Carthage Africa School Project. BASS FUNERAL HOME, GORDONSVILLE CHAPEL, DIRECTORS

The family of Richard T. Russell created this Life Tributes page to make it easy to share your memories.

Send flowers to the Russell family.