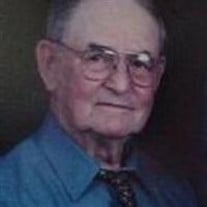 Mr. Crockett Robins Winfree Age 98 of Hiwassee, TN passed away Sunday, March 17, 2013 at Quality Care Nursing Home in Lebanon.Mr. Winfree was born October 16, 1914 in Brush Creek, TN, the son of the late Estes Gilliam Winfree and Ova Mai Webster. He was married to Nettie Hortense Pritchett Winfree on June 2, 1934 and she preceded him in death on May 23, 1997. Crockett was also preceded in death by Seven Siblings; Irene Allison, Gordon Winfree, Sr., Mary Lee Tabor, Neal Winfrey, Paul Winfree, Katie Eby, and Ray Winfree. He was saved at an early age and was a member of the Knob Springs Missionary Baptist Church. He moved to Hiwassee in 1950. Mr. Winfree is survived by his Three sons; Harold (Wilma) Winfree of Hiwassee, TN, Dewey (Janie) Winfree of Hiwassee, TN, and Jimmy Winfree of Hiwassee, TN. Grandson; Jeff (Dianna) Winfree of Hiwassee, TN. Great-Grandson; Grant Winfree of Hiwassee, TN. Two Brothers; Haskell Winfree of Commerce, TN and Donald Winfree of Rome, TN.Funeral Services for Mr. Winfree are scheduled for Wednesday, March 20, 2013 at 1PM at the Carthage Chapel of Bass Funeral Homes with Elder James Thomas Gibbs officiating. Interment will follow in the Smith County Memorial Gardens.Visitation with the Winfree Family will be held on Tuesday at the Carthage Chapel of Bass Funeral Homes from 3PM to 8PM and again on Wednesday from 10AM until the time of the service at 1PM. The Winfree Family requests that donations in Mr. Crockett Winfree’s memory be made to the American Cancer Society or to the Knob Springs Missionary Baptist Church.

The family of Robins Winfree created this Life Tributes page to make it easy to share your memories.