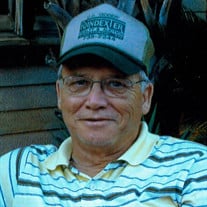 Mr. Ronald Mickel, age 72 of Carthage, TN, passed away on Monday, December 27, 2021. Mr. Mickel was born September 1, 1949 in Dayton, TN, a son of the late Kenneth John Mickel and Ruth Eulene Morrow Mickel. Mr. Mickel was a 1968 graduate of Rhea County High School. He worked at numerous factories over the years and was a carpenter by trade. Mr. Mickel served his country in the United States Army during the Vietnam Conflict as a sharpshooter. While serving he received a Purple Heart and Bronze Star along with numerous other awards. He married Linda Faye Dennis on May 22, 1981. Mr. Mickel enjoyed the outdoors and especially enjoyed them with his grandkids: going fishing, to the beach, waterparks and Gatlinburg trips. He enjoyed woodworking and did it most of his life. He loved his grandkids dearly. Mr. Mickel was saved and was a Baptist. Mr. Mickel is survived by Wife; Linda Mickel of Carthage, TN. Three Daughters; Belinda McKinley of Lebanon, TN, Melissa Poindexter of Hickman, TN, and Mary (Daniel) Forrester of Livingston, TN. Grandchildren; Marquis, Chynna, Asia, Madeline, Kenneth, Drake, and Mattisyn. Brother; Donnie (Charlotte) Mickel of Spring City, TN. Brothers-in-Law; Sammy (Joan) Dennis, Jimmy (Beverly) Dennis, Billy Dennis, Randy (Melinda) Dennis, Donnie Dennis, and Ronnie (Lyla) Dennis. Several nieces and nephews also survived. Funeral Services for Mr. Mickel are scheduled to be conducted at the Carthage Chapel of Bass Funeral Homes on Friday, December 31, 2021 at 1PM with Bro. Gerald Ragland officiating. Interment will follow in the Smith County Memorial Gardens. Visitation with the family will be at the Carthage Chapel of Bass Funeral Homes on Thursday from 2PM until 8PM and on Friday after 10AM until service time at 1PM. The family requests memorials be made to Tennessee Oncology – Gallatin.

The family of Ronald Mickel created this Life Tributes page to make it easy to share your memories.

Send flowers to the Mickel family.