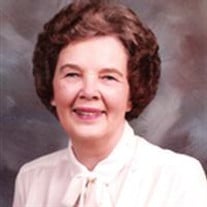 Mrs. Ruby K. Waggoner age 99, of South Carthage, TN, passed away Wednesday, January 7, 2015 at the Kindred Nursing and Rehab in Carthage, TN. Mrs. Waggoner was born November 4, 1915 in the Monoville Community, the daughter of the late, W.E. Key and Gertrude Chaffin Key. She married John C. Waggoner on January 19, 1936 and he preceded her in death on May 9, 2003. John and Ruby started Waggoner Oil in 1939 and operated it for 52 Years. Mrs. Ruby was a member of the Hogans Creek Missionary Baptist Church and also the DAR. Mrs. Waggoner is survived by Two Children; John C. Waggoner, Jr. and his wife, Retta, and Linda W. Nixon and her husband, Kenneth, all of South Carthage, TN. Five Grandchildren; Robert Waggoner, Michelle Hudson, Michael Nixon, Stacy Ferguson, and Joey Nixon. Six Great-Grandchildren; Brittany Hudson, Logan Hudson, Ryan Nixon, Tristan Nixon, David Pugh, and Dylan Ferguson. Caretaker and Friend; Pat Dixon also survives. Funeral Services for Mrs. Waggoner are scheduled to be conducted Saturday, January 10, 2015 at 11AM from the Chapel of Bass Funeral Home, Carthage, with Elder Charles Allen Gentry officiating. Interment will follow in the Ridgewood Cemetery. Visitation with the Waggoner family will be held from the Chapel of Bass Funeral Home, Carthage on Friday from 5PM to 8PM and on Saturday from 9AM until service time at 11AM. In lieu of flowers, the Waggoner Family requests that memorial contributions be made to the charity of your choice. BASS FUNERAL HOME, CARTHAGE CHAPEL, DIRECTORS.

The family of Ruby Waggoner created this Life Tributes page to make it easy to share your memories.

Send flowers to the Waggoner family.