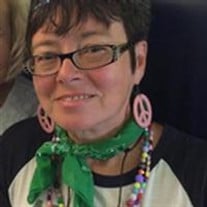 Ms. Tammy Ann Vanatta age 55, of Alexandria, TN, passed away Wednesday, January 13, 2016 at her home. Ms. Vanatta was born November 20, 1960 in Lebanon, TN, the Daughter of Barbara Ann Smith Vanatta and the late Clyde Vanatta, who preceded her in death on November 22, 2003. Tammy was saved on September 21, 1982 and was a member of the West Main Baptist Church. She loved her church dearly. Tammy worked at Dillard’s and Prichard’s Grocery for numerous years, and worked at the Alexandria Café for 17 years. She loved life, kids, and worked hard. Tammy touched numerous lives and will be dearly missed. Tammy is survived by Mother; Barbara Vanatta of Alexandria, TN. Sister; Teresa (Tom) Lynch of Alexandria, TN. Brother; Richie Vanatta of Statesville, TN, and Nephew; Kameron Vanatta of Statesville, TN. Celebration of Life Services for Ms. Vanatta are scheduled to be conducted from the Sandlin Center at the Alexandria Fairgrounds on Sunday, January 17, 2016 at 2PM with Bro. Dusty Desimone and Bro. Ben Simpson officiating. Interment will follow in the Simpson Cemetery. Visitation with the Vanatta family will be held at the Avant Funeral Home on Saturday from 10AM until 8PM and at the Sandlin Center at the Alexandria Fairgrounds on Sunday from 10AM until the time of the service at 2PM. The Vanatta Family requests that you attend Tammy’s funeral dressed as you remembered Tammy, such as: Hippie, Vintage, Vandy Fan, 49ers Fan, Steelers Fan, Elvis, Halloween, James Taylor, Hall & Oats, Donna Summers, the Beetles, or any others. In lieu of flowers, the Vanatta Family requests memorials in Tammy’s memory be made to the West Main Baptist Church. AVANT FUNERAL HOME, DIRECTORS.

The family of Tammy Vanatta created this Life Tributes page to make it easy to share your memories.

Send flowers to the Vanatta family.