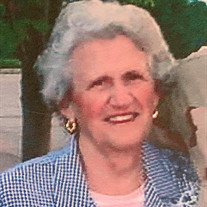 Mrs. Veva Elizabeth Harrison Holleman, age 88, of Lebanon, TN, passed away on Thursday, December 12, 2019. Mrs. Holleman was born October 6, 1931 in Lebanon, TN, a daughter of the late Campbell Harrison and Annie Glen Plumlee. She married Billy L. Holleman on December 21, 1952 and they were married 66 years prior to his death on July 31, 2018. Mrs. Veva was also preceded in death by Brother; Arnold Skelton and Sisters; Carolyn Clay, Reba Tribble, and Virginia Schupbach. Mrs. Holleman was a 1949 graduate of Smith County High School. She worked managing school cafeterias in Davidson County and Wilson County for over twenty years. She was a member of the College Hills Church of Christ in Lebanon, TN. Mrs. Holleman is survived by Two Children; Nick (Joyce) Holleman of Lebanon, TN, and Susan (Ken) Thompson of Potomac, MD. Five grandchildren; Matthew (Shanda) Holleman, Megan Weis, Caitlin Weis, Whitney Weis, and Abbey Weis. Three great-grandchildren; Emma Kate Holleman, Everett Holleman, and Elisabeth Claire Holleman. Numerous nieces and nephews. Sister-in-Laws; Charlene Mofield of Carthage, TN, and Sue Holleman of Lebanon, TN. Affectionately known as Nana by her family, she will always be remembered for her forthrightness, her selflessness-especially in taking care of her husband in his later years, her love for her family and her amazing chocolate pies. She will forever be missed. Graveside Services and Interment for Mrs. Holleman are scheduled to be conducted on Sunday, December 15, 2019 at the Gordonsville Cemetery at 2PM with Ken Beck officiating. Visitation with the Holleman family will be at the Carthage Chapel of Bass Funeral Homes on Saturday from 2PM until 6PM and on Sunday after 12PM until departure for the cemetery at 1:30PM. In lieu of flowers, the family requests donations be made to Alive Hospice, Nashville. Thank you to the nurses at Alive Hospice in Nashville for providing such compassionate, loving and dignified care to our Mom in her final days. We are forever grateful. Pallbearers: Matthew Holleman, Everett Holleman, Basil Skelton, George Clay, Robert Schupbach, Scotty Wilmore, Mike Mofield. BASS FUNERAL HOME, CARTHAGE CHAPEL, DIRECTORS.

The family of Veva Elizabeth Holleman created this Life Tributes page to make it easy to share your memories.

Send flowers to the Holleman family.