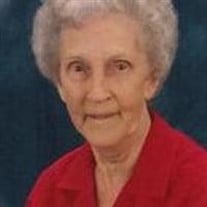 Mrs. Geneva Williams Boles, age 95 of Gordonsville, TN passed away Friday, August 23, 2013 at Riverview Regional Medical Center in Carthage, TN.Mrs. Boles was born June 2, 1918 the daughter of the late Mallissie Pope and Tone Williams. She was also preceded in death by Seven Brothers; Edgar Williams in 1975, Haskel Williams in 1936, Toney Williams in 1980, Rosco Williams in 1920, Charlie Williams in 1974, Cordell (Trix) Williams in 1975, and Bryant Williams in 1998: One Sister; Willie Greene Ray in 1931. Mrs. Geneva liked talking to her friends and neighbors, watching Atlanta Braves Baseball, with Chipper Jones being her favorite player, crocheting and quilting, and cooking; especially for her Great-grandchildren. She was a homemaker and also worked at the Smith County Shirt Factory for over 29 years. Mrs. Geneva was Baptist by faith, and was saved at the age of 20.Mrs. Boles is survived by her Daughter; Willie Ann (Odell) Maynard of Gordonsville, TN. Three Grandchildren; Jennifer Maynard of KY, Janna (Jimmy “Bobo”) Woodard of Hickman, TN, and Marcus (Rachel) Maynard of the St. Mary Community. Two Great-Grandchildren; Kalen Woodard and Kiersten Woodard both of Hickman, TN. Close Friends; Martha Murphy of Lebanon, TN, and numerous nieces and nephews also survive.Funeral Services for Mrs. Boles are scheduled to be conducted 3PM, Sunday, August 25, 2013 at the Gordonsville Chapel of Bass Funeral Homes with Bro. Shane Smith and Bro. Bill Parkerson officiating. Interment will follow in the Gordonsville Cemetery.Visitation with the Boles family will be held on Saturday from 3PM to 8PM and again on Sunday after 10AM until the service time at 3PM. BASS FUNERAL HOME, GORDONSVILLE CHAPEL, DIRECTORS.

The family of Geneva Williams Boles created this Life Tributes page to make it easy to share your memories.

Send flowers to the Boles family.