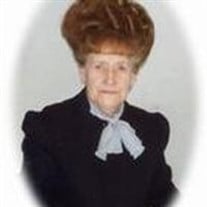 Mrs. Willie Forrest Rollins, Age 87 of Gordonsville, TN., died Thursday, March 6, 2008 at Riverview Regional Medical Center, Carthage, TN. Mrs. Rollins was born November 7, 1920 in Smith County, TN., the daughter of the late Jessie Lou Parker and Robert Stanton Preston. A brother, Joe Bridges Preston preceded her in death on January 5, 2008. She was married to Frank Roy Rollins on July 3, 1937 and he preceded her in death on May 1, 2004. Their grandson, Frankie Rollins preceded them in death on January 4, 1990. She was a homemaker and was a member of the Church of God of Prophecy. Mrs. Rollins is survived by Two Daughters and Sons-in-Law: Joyce and Bill Parkerson of Lancaster and Erma and Kenneth Williams of Gordonsville, TN. Son and Daughter-in-Law, Larry and Bridgett Rollins of Gordonsville, TN. GrandDaughers: Jolanda Swafford and Tina (Steve) Craig. Great Grandchildren: Carla Swafford, Clifton Swafford, Austin Craig and Kurt Craig. Great-Great Grandchild, Tyelar Swafford. Sisters: Beatrice Rollins of Lebanon, TN and Edna Dimple Wilson of Gordonsville, TN. Mrs. Rollins remains are at the Gordonsville Chapel of Bass Funeral Homes where Funeral Services will be held on Sunday, March 9, 2008 at 2:00 P.M. conducted by Bro. Bobby Peoples and Bro. Jimmy Guire. Interment will follow in Gordonsville Cemetery.The Rollins family will receive friends at the Gordonsville Chapel on Saturday from 10:00 A.M. to 8:00 P.M. and on Sunday from 10:00 A.M. until service time at 2:00 P.M.

The family of Willie F. Rollins created this Life Tributes page to make it easy to share your memories.

Send flowers to the Rollins family.