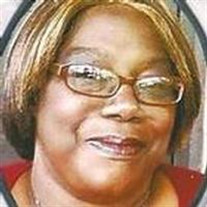 Mrs. Wilma Dean Young, Age 57 of Carthage, TN passed away Sunday, May 6, 2012 at Riverview Regional Medical Center in Carthage, TN. Mrs. Young was born August 1, 1954 in Carthage, TN the daughter of the late Howard and Geraldine Wester Young. She was also preceded in death by a son; Prentice Shane Young. She worked as a restaurant cook.Mrs. Young is survived by her son; Brandon (Logan Preston) Young of Carthage, TN., Two Grandchildren; Kamara Lea and Brandon Tre’Shawn Young of Carthage, TN. Nine Siblings; Katherine Young of Carthage,TN, Peggy Chumney of Hartsville, TN, Jimmie Mai Brown, Shirley Young, William Young, Glenn Young, and Carl Young all of Nashville, TN, Betty Nunlet and Charlie Woodmore both of Lebanon, TN. A host of nieces, nephews and cousins also survive. Graveside Services and Interment for Mrs. Young will be held on Thursday, May 10, 2012 at 11 AM at the Ridgewood Cemetery in Carthage, TN. The Young family requests that in lieu of flowers, memorials be made to the funeral fund.

The family of Wilma Young created this Life Tributes page to make it easy to share your memories.